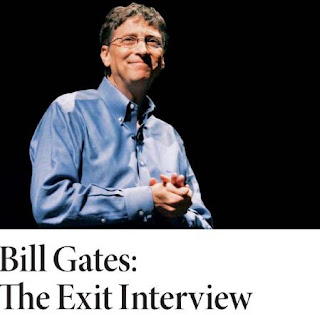 Bill Gates sat down with Michael Miller to discuss his role in the tech world over the past 30 years, and what the future holds for him—and for us.

At the end of the month, Bill Gates is stepping down as chief software architect of Microsoft, and retiring from his day-to-day role at Microsoft, the company he co-founded and led for most of the past 30 years. Michael J. Miller, former PC Magazine Editor-in-Chief, sat down with him to look back at how the computer industry has evolved over that time, and where it is headed.


Miller's own thoughts on Gates and the interview can be found here.

Part I: Hits and Misses

Michael Miller: From a technology standpoint, what would you say is your biggest success? Was it making the PC popular or the graphical user interface?

Bill Gates: The most important thing is the creation of the software industry and the importance of having this platform that anybody can write to. That goes back to Microsoft Basic on the Altair, the Commodore PET, TRS-80, Atari 800, Apple II—building up a library of programs that people use to get something done.

There was no software industry before the PC came along. The whole magic was that computers became so cheap, and you need a lot of software, so people can sell software in volume and price it quite reasonably. That magic of high volume, low price just wasn't possible in an era with a very modest number of very expensive computers. Most companies that did software did it as a sideline before we came along.

Basically we take that idea of a whole software industry, and we ourselves do some of the big things. We evolved the platform of the software industry from Basic to DOS; from DOS to Windows; from Windows to .Net Internet; to modeling, cloud computing, natural user interface…

The platform is changing because of the hardware improvements and the kind of scenarios that are possible. It's just so different. We are about building a software platform and a software company.

M: Over the years, you have also talked about a number of technologies that you thought were going to be successful but haven't reached mainstream appeal as much as I think you thought they would: SPOT, tablet PCs, speech recognition, stuff like that. What do you think it is: a software or hardware problem, or just society? Why did some things become incredibly popular and some things stay more or less as niches?

B: Look what was written down from when Paul and I started Microsoft. Half the things we dreamed of as scenarios for software to solve are still in front of us.

Natural interface including speech, and the kind of inking that comes out on the tablet. My prognosis, you can call it stubbornness, is simply that it is not ready for the mainstream yet. We have to keep improving the software and hardware. But I have no doubt that the current way we interact—which is overwhelmingly a keyboard and mouse way—in the next decade will be changed deeply. Not that it will go away, but it will be supplemented by speech, vision, ink-type things. And this is the kind of issue where Microsoft gets to put billions of dollars behind those beliefs.

The tablet: it's taken off in some niches. There are millions sold a year, but not tens of millions. My belief is that we will get to hundreds of millions. So we are a factor of 100 away from what I wanted to happen and I believe will happen, where every student instead of having paper textbooks has this great device connected to the Internet that allows them to edit, create, record voice, browse, in this very deep way.